The United Nations General Assembly adopted resolutions, A/RES/47/193 of 22nd December 1992 by which 22nd March of each year was declared World Day for Water, which has been observed  since 1993, in conformity with the recommendations of the United Nations Conference on Environment and Development (UNCED) contained in Chapter 18 (Fresh Water) of Agenda 21. States were invited to devote the day, as appropriate in the national context, to organise concrete activities such as the promotion of public awareness through the publication and diffusion of documentaries and the organization of conferences, round tables, seminars and expositions related to the conservation and development of water resources and the implementation of the recommendations of Agenda 21.

Malawi is endowed with numerous water bodies including the 3rd largest freshwater lake in Africa. This resource is precuious and need to be preseved and manageed in sustainable manner.

Situated in the south of Malawi close to the eastern border with Mozambique, the Lake Chilwa Wetland Biosphere Reserve is home to one of the world’s most diverse populations of bird species. Lake Chilwa is the second largest lake in Malawi and was formed by tectonic processes. It encompasses an area of approximately 240,000 ha and the water level rises up to 627 metres above sea level. The lake functions as a shallow inland drainage basin. Its eastern side is composed of sandy soils, while the remaining soils comprise fine-grained clays. Altogether, the Chilwa plain consists of seven agro-ecological zones defined by different soil groups. In addition, the reserve’s topography includes the Chilwa plains, open lake waters and mountainous areas such as Mount Zomba and Mount Mulanje. In 1997, the wetlands of the Biosphere Reserve were designated a Ramsar site due to their global significance as a major waterfowl habitat.

The Biosphere Reserve lies within the tropical dry or deciduous forest biogeographical region. Different land cover types are distributed throughout the reserve, including marshes, swamps, open lakes, five major rivers, islands, cultivated floodplains and grasslands. Lake Chilwa is a tropical closed lake. Under usual circumstances one-third of the lake consists of open water, one-third of marshes and one-third of floodplains. This distribution, however, varies according to seasons. Dry seasons (May–October) and wet seasons (November–April) lead to seasonal fluctuations of the water level of up to one metre. Within the last century, the lake has dried and filled up eight times.

Forests within and surrounding the reserve are some of the oldest in all of Malawi. Typha swamps cover wetland areas and serve as habitats and food providers for numerous species.  They are equally important for nutrient cycling. Overall, the bio-reserve has 35 endemic species. However, seasonal burnings of vegetation for hunting purposes endanger many particularly vulnerable species. Examples of common fauna species that live in the reserve are Pelecanus rufescens (Pink-backed pelican), Python sebae (Python) and Alestes imberi (Spot-Tail Tetra). Zonocerus elegans (Elegant grasshoppers) and Pelomys fallax (Creek rats) are frequently consumed species. The  Biosphere Reserve is also rich in bird species with 164 species living within the reserve and 41 Palaearctic and 14 intra-African migrant species seasonally inhabiting the area.

Lake Chirwa Wetland Biosphere Reserve faces high population pressures with 77,000 people living in the transition zone and 916,447 in the entire Lake Chilwa basin. The nearest major towns are Machinga, Phalombe and Zomba. The principle economic activities, such as rice farming, fishing, bird hunting and livestock rearing, take place within the transition area. Within the core and buffer zone economic activities are limited to fishing, and transportation is permitted only via canoes or small-engine boats. The fishery yields 25,000 tonnes of fish each year, while fuel wood amounting to 6,500 tonnes of wood per year, is used for the fish-smoking industry.

Bird sanctuaries and other protection sites used to exist within the core area. In 1926, the Chidyamphiri islands in Lake Chilwa were declared game reserves to protect the python population. In 1928, the 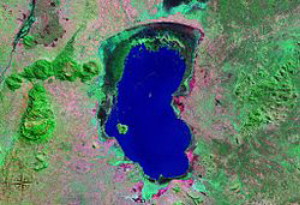 southern end of the Biosphere Reserve was proclaimed a bird sanctuary. These sanctuaries and protective sites no longer exist, but present an ideal basis for the future construction of similar sites.

The dominant tribal group in the Lake Chilwa Wetland Biosphere Reserve is the Yao. Other aboriginal groups include the Chewa and Nyanja, among others. The catching of fish has a traditional and cultural importance for the local population – the higher the amount of fish caught, the higher the chances of receiving good luck. Fish are also used as sacrifices and medicinal resources. During school holidays, the Yao celebrate certain ceremonies and perform Manganje dances. The Yao had a strong connection with the Sena people, who used to live permanently in the area until the Chilwa Lake dried out during several seasons. They are renowned for introducing dowries into marriage (Lobola). In 1995, Lake Chilwa and its wetlands dried up completely resulting in severe starvation among local people. This highlights the importance of Lake Chilwa as a vital resource for survival.

The Mount Mulanje Biosphere Reserve is located in the south west of Malawi, near the border with Mozambique. Mount Mulanje is situated halfway between mountain chains and upland areas extending from the Ethiopian highlands to South Africa. It has a rich biodiversity with a high level of endemism. The Mulanje cedar (Widdringtonia whytei) found in the reserve is considered the national tree of Malawi and is highly valued for its use in silviculture and its contribution to socio-economic development. Its protection and sustainable use is of priority concern.

There are three main ethnic groups and several minorities living in the area. The main land-use activities are agriculture and pastoralism, selective logging, and extraction of medicinal plants and other non-timber forest products, as well as ecotourism. The mountain also carries an important cultural significance, as ancestral spirits are believed to reside there. These sites are now used as shrines for traditional rites.

This Biosphere Reserve covers an area of mountains 26 km by 22 km formed by an impressive geophysical syenitic intrusion rising precipitously from the surrounding plains. The altitude of the reserve ranges from 600 m above sea level to the highest point of Sapitwa Peak at 3,002 m. A large section of the mountainside consists of a sheer rock face interspersed by rainforest gorge valleys to the south and east and dry brachystegia woodlands on the north and western slopes.

The Mulanje Cedar (Widdringtonia whyteii), recognized as the national tree of Malawi, is a key species found in the mountain high cloud forests and is listed as critically endangered on the IUCN Red List. The timber is highly prized for a variety of specialist purposes; however, illegal unsustainable harvesting has led to diminishing forest cover — a matter of particular concern in small cedar clusters. 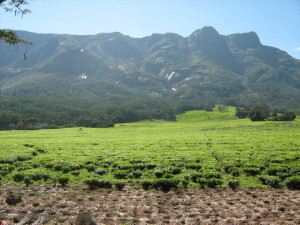 David is currently holding fort for Natural Science pending recruitment of a substantive officer for the programme.