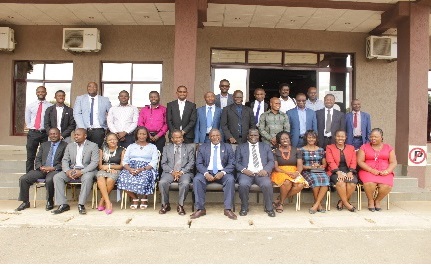 Group Photograph of participantsThe Malawi National Commission for UNESCO in collaboration with the Department of National Records and Archives Services is running a programme to promote proper records and archives management in Malawi. As part of the programme, a two day workshop was organised to discuss how the professionals in records management and archiving can network to share experiences and access opportunities for proper records management and archiving training available in UNESCO affiliated bodies.

The workshop, which took place at Bridgeview Hotel in Lilongwe from 10 to 11December, 2018, was officially opened by the Minister of Civic Education, Culture and Community Services, the Honorable Everton Chimlirenji, MP.

In his opening speech, the Minister hailed Malawi National Commission for UNESCO and the Department for the initiative which he said was in line with the the National Culture Policy which places emphasis on heritage preservation in its many forms including documentary heritage, both paper and audiovisual. He said that proper records management also contributes to the implementation of the Access to Information Law. He further said that it was a good idea to establish a national professional network of records managers and archivists and his Ministry would support such efforts.

A national network would facilitate experts’ affiliation to international networks such as SOIMA, IFFA, AISA and others and benefit from the training opportunities available.

On his part the Acting Executive Secretary of Malawi National Commission for UNESCO, Mr. Emmanuel Kondowe said that sound and image is critical in tourism as it is the main media of publicity of tourist products. Yet many sound and image collections are held in institutions that do not specialise in this area and therefore, lack the competencies or the necessary support to manage and preserve such collections. Unless action is taken now, most of the sound and image heritage of the past century will disappear. He added that, coupled with improper management of the paper records, one can image the extent of the loss that is there. No wonder sometimes we here that court documents are missing, it is not always due to malicious intentions but simply because records are not well managed and archived.

In his remarks the Chief Director in the Ministry of Civic Education, Culture and Community Services said that currently the National Commission for UNESCO is using its networks to support the digitisation of the sound and image archives at the National Archives. About 1,000 films have been identified for digitisation and the work is continuing right now. 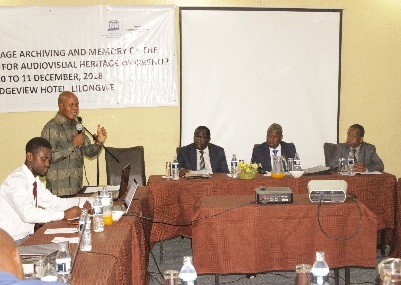 As part of the solution, the participants agreed to form an association of records managers and audiovisual archivists in Malawi. The final name of the association will be agreed as consultations are on-going. Among other things the network will lobby for better records management as well as development of relevant courses at tertiary level. On the latter, the participants noted that there are only courses on library science which fall short of the kind of courses required for the whole process of records

Judith Opoku Boateng University of Ghana Kwabena Nketia Archives sharing experiencesmanagement and archiving. Dr. Robert Chanunkha of the Malawi University of Science and Technology (MUST) said that his institution is interested in providing courses on records management and archiving relevant to the Malawi situation and that are adaptable to latest innovations in the field. He said he would be discussing with the National Archives and Malawi National Commission for UNESCO to immediately begin working towards this.

One of the facilitators, Mrs. Judith Opoku-Boateng from University of Ghana said that SOIMA, IFFA, IASA and several other international bodies and networks run innovative courses crucial to documentary records management and archiving which the local professionals could take advantage of.

The Doping Control Process for Athletes